He anticipated another snowfall in the morning as he closed his eyes on Friday night. “Maybe there will be another surprise for me by my fort.” But in the morning he was disappointed to see only a heavy accumulation of frost. It was beautiful hoarfrost, but Alfred wanted snow.

The cow and sheep on his dresser were making little sounds as though to get his attention. As he approached them, they moved to face him and nuzzled his fingers as he reached for them. “Let’s go see what marvels we can find this morning, guys.” They nodded in agreement.

There was no iridescent snow to lead him and no silver cylinder near his fort. The animals in his pocket, though, were moving and wriggling. He took them all out, careful not to drop them in the snow. Standing in the woods, Alfred kicked at the ground, his disappointment evident in his slumped shoulders. “No new animals are coming.” He looked at the ones he held. “You’ll have to be enough. Let’s go home.”

They shook their heads, “No.” Then all of them looked left as though to say, “Go that way.”

Alfred begrudgingly followed their lead, although he had lost hope of finding anything else. He trudged through the old snow, holding the animals in his palms until they all started jumping up and down, their motions saying, “This is it!”

Standing before an enormous stump of an ancient tree, Alfred could see nothing unusual. He walked around it. Nothing. He walked around again. Noticing indents in the tree at eye level, he thought that maybe he could climb to get a look at the top. He put Elsie and the sheep in his pocket and stretched up to grab the indent. He hoisted himself up and found more indentations, almost like a ladder.

The top of the stump was about ten feet above the ground. In spite of the hoarfrost covering everything in the forest, the stump and its top were clear and dry. Alfred looked around, expecting to see another miniature animal, maybe a horse or donkey, but there was nothing. The animals in his pocket were squirming. “It’s here,” they all said. Alfred looked again and noticed a glowing light near the far edge of the stump. He slithered on to the top and crawled to the other edge. As he reached out to touch the light, it moved and became larger. He felt a force lift him from the stump and set him gently on the ground. At the very edge of his vision he perceived what appeared to be a person in diamond covered clothing, but every time he turned his head, it moved to be at the edge of his peripheral vision. He heard in his mind, “Don’t try to see me directly, but look for what I enlighten.” 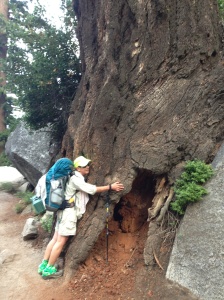 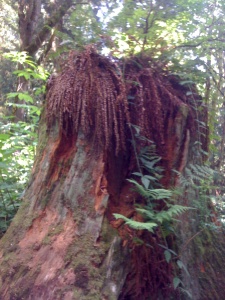 Since retiring from Northwest Airlines and moving to the Pacific Northwest, I have more time to devote to writing. My first novel, "Tales of Two Sisters" was published over a year ago. I have been writing poetry for a long time and am attempting to collate my poetry into a short book, with pictures. A sequel to "Tales of Two Sisters" should be getting closer to completion soon. Gardening and tending the vineyard take a lot of time in the summer. Even though I love the outdoors, these activities do cut down on my writing. So I appreciate that wintertime allows me time to write. Writing, for me, is what brings things into focus and helps me to make sense of the things that life brings. It is a gift to me and I hope that it will be to you also.
View all posts by dmdubay →
This entry was posted in Uncategorized. Bookmark the permalink.